Baldness is a phenomenon that affects millions of people around the world. Very often, this situation can damage the morale of these people. Indeed, the onset of baldness can cause a decrease in self-esteem and self-confidence. As a result, it is the well-being of the people concerned that is reduced.
How to live with it and regain your self-confidence? I am giving you lots of Quotes about hair loss that will help you live with baldness through this article. 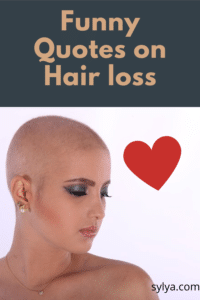 During the heatwave, they were told they could cook an egg on their heads. In winter, they are asked if they are not too cold without their caps. Bald people have a hard time in our society of long-haired people. But if we make jokes to them, it’s because we like them. Besides, we’re going to give a diaper with a few jokes to pull out on your favorite bald guys. 100 happiness quotes that will make you smile immediately